In the mid-nineties,  Intel Pentium was king. There was nothing else. Certainly not in the low-end PC building space which I occupied at the time. If you were building a PC you had to have a Pentium in it. But the same was true of the entire x86 market.

But in 1996, AMD launched its first x86 compatible processor that was available to the public, the K5.

Slowly, over the next few years, AMD released more and more x86 processors including the mighty Athlon. They were often cheaper and more performant than their Intel counterparts. It seemed like that anybody who knew anything (when it came to building your own PC), was using AMD.

AMD was flying high all the way up until the mid naughties when Intel struck back. Intel introduced the Intel Core processor range, which even today is still at the heart of Intel’s desktop and mobile range of products. Intel Core was a major advancement and left AMD looking antiquated and, for a long time, AMD has struggled to keep up, until now.

Intel has dominated the x86 world with such mastery since the introduction of Intel Core that AMD had almost entirely slipped from my memory. It was with some surprise that I read that Microsoft was introducing AMD to Azure. I then started to read up on AMD’s Zen Microarchitecture and began to wonder, “Could this really be the second coming of AMD?”.

Let’s stop for a second. This isn’t 1999 and I don’t build desktop PCs anymore. Why is this important to me now?  I architect SAP solutions for customers on the Azure platform. I strive to understand how to get the most for my customers using Azure.  Like everything SAP-related, everything you use for an SAP system needs to be tested and certified including Azure VMs. On Friday 29/11/2019 I got an email notifying me of an update to SAP Note 1928533 – SAP Applications on Azure: Supported Products and Azure VM types. SAP now supports the new AMD Azure VMs.

One of the reasons I love Azure and this SAP Note is that it gives you the performance of each certified VM in SAPS (SAP’s standard benchmarking metric). Having the SAPS figure for each VMs makes implementing a customer’s sizing straightforward.  If they need 10,000 SAPS you can select a VM which is a good match, as simple as that. But it also allows you to compare VMs, which is exactly what I did when a saw the new AMD VMs were certified.

The newly certified AMD based VMs

The following charts show how these new VMs stack up against the Intel equivalents that are SAP certified. 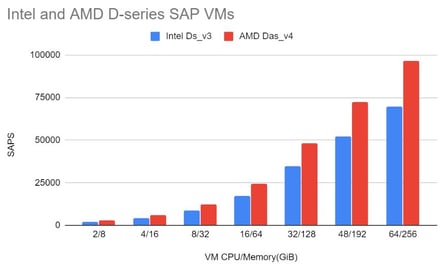 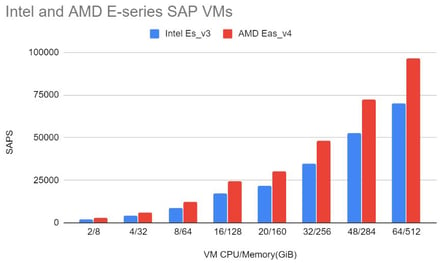 In both D and E series VMs, the new AMD VMs provide more SAPs than the equivalent Intel systems as tested by SAP.  In every comparison, the AMD VM provided at least 38 percent more SAPS! But what about the price? Now, this is where it gets really interesting.  The E-series VMs are the same as their Intel equivalents. However, the D-series AMD VMs are less than half of the price than the latest Intel versions. This means you could half the cost of a D-Series Intel VM by relacing it with AMD and still receive a ~40 percent performance increase.

One downside for the AMD systems is that they are not yet available as reserved instances.  The above cost details are based on “Pay as you go”. Hopefully, this will be resolved soon.

AMD’s recent success with the Zen Microarchitecture opens up some interesting questions:

Right now, I don’t have the answers but I do know one thing, AMD is no longer a distant memory of my home PC builds.  Perhaps Intel has finally got some serious competition again. One thing that is for certain is that I’ll be introducing the new AMD VMs to all customers we are migrating to Azure.